Ugelbølle is a growing village with a focus on children and community. The village is located close to the shore with access nearby to forest and has an impressive view of Mols and Kalø Vig.

Ugelbølle inhabits around 1,300 people; the average person being 42 years of age. The village typically attracts families with children, who want to live near nature in a good and safe environment for children and young people. Ugelbølle is also a child-friendly village with Børnehuset Uglen (0-6 years), Ugelbølle Friskole (0-6th grade), Ugelbølle Forsamlingshus (used as a meeting place for teenagers, among others), Ugelbølle Park, a bike path to Rønde and many playgrounds.

Ugelbølle’s enthusiastic inhabitants and their true commitment, their team spirit and a high degree of involvement are important reasons as to why Ugelbølle since the national municipality reform in 2007 has seen an increase in the number of inhabitants of approximately 18%; mainly consisting of families with children from Aarhus. That is the largest increase in the number of inhabitants among villages in Djursland. In Aarhus, that number is approximately 12%.

A study from 2012 has shown that 99% of Ugelbølle’s inhabitants are satisfied with living here, only 1% has not felt welcome and less than 4% feel that it is difficult to get in contact with other citizens.

Ugelbølle is located near the motorway and Aarhus Airport, and the city of Aarhus can be reached by bus (30 minutes by bus, 25 minutes by car). The village also has a central location close to many different attractions. 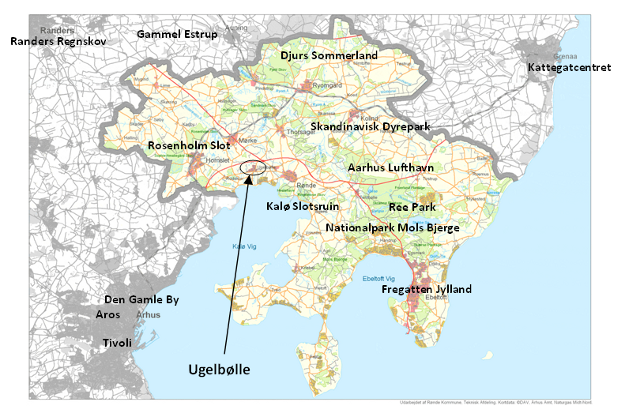